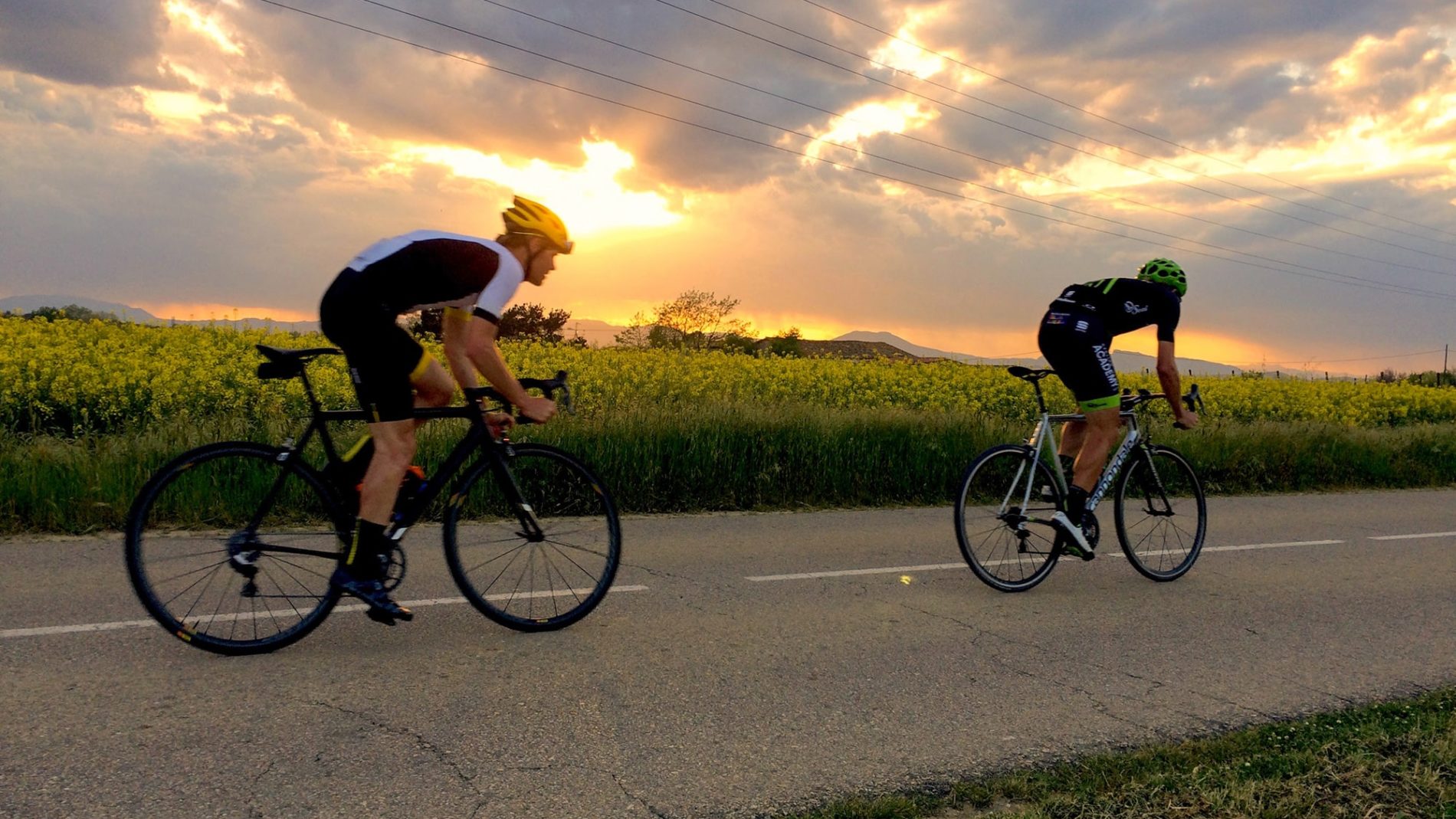 Have you followed our itinerary with the first stage of the route? Let’s get started with the second!

The second stage is a beautiful route round seven medieval towns: Palau Sator, Peratallada, Vulpellac, Fonteta, La Bisbal d’Empordà, Monells, Cruïlles and Calonge. And we also have a small hill-climb of 9km to get those legs working and to finish the route, there is a false flat to end up back at Camping Internacional de Calonge.

Like we said in stage 1, this route can be done in just 1 day. It’s 90km starting and ending at Camping Internacional de Calonge, we’ve left you the tracks so you can decide how to do them! To download the routes, click on the 3 lines in the top, right-hand corner. The first one is the general route and the second one is stage 2.

Information
Click following button or element on the map to see information about it.
Lf Hiker | E.Pointal contributor

The route that awaits us today is approximately 66km with easy roads with a bit of traffic until we get to the Coll de la Ganga, where we’ll get to calm down and see the sea again. Do you want to get to know them? Helmets on and let’s go!

Palau-Sator and the clock tower

A small, walled town also considered a place of National Cultural Interest like Pals, within the category of historical area. It has a Romanic church from the 13th Century and the entrance to the town is famous for the clock tower.

In Palau-Sator, if you need to, you can stop to have breakfast or lunch in one of the many restaurants. We personally like Restaurant Sa Torre, that is built-in to the old wall and has a small dining area inside the wall (with a prior reservation).

After visiting this marvellous Empordà town, we hop back on our bikes and head over to Peratallada with just 2.5km of straight road surrounded by fields.

Peratallada, one of the most important architectural centres in Catalonia.

As they say on the web page of visitperatallada, this town is considered a historical and artistic place of interest, being one of the most important architectural medieval towns in Catalonia for the castle-palace, walls, houses and cobbled streets… but most of all, you’ll be turning to stone when you see the old moat dug out behind the old stone walls.

We leave Peratallada with half of our route done (46km) and we cycle towards Vulpellac.

We leave Peratallada with half of our route done (46km) and we cycle towards Vulpellac.

Vulpellac is a historical town that dates back to the 9th Century. Declared a town of National Cultural Interest for its historical meaning, it has a castle from the 12th Century and like the other medieval towns on this route, Vulpellac will dazzle you with its old-world feel on its cobbled streets.

Vulpellac is a historical town that dates back to the 9th Century. Declared a town of National Cultural Interest for its historical meaning, it has a castle from the 12th Century and like the other medieval towns on this route, Vulpellac will dazzle you with its old-world feel on its cobbled streets.

I’m sure that the vibrations are taking a toll in your hands by now, and your bottom is numb from cycling on so many cobbles. But remember that if the streets weren’t cobbled, we wouldn’t be talking about authentic Empordà towns.

The town of Fonteta is located in the heart of the Baix Empordà and is a crossroads for many walking and cycling routes.

Next to the Church from 904, you’ll be able to refill your water bottles from the water fountain that gives its name to the town.

In this town, you can taste the best recuits (fresh cheese and semi-cured cheese that are used mainly for desserts) and you can also visit the km0 shop called Abricoc.

La Bisbal, the capital of ceramics

La Bisbal is the cultural centre of ceramics and pottery and that is reflected in the old industrial chimneys, that are integrated within the urbanistic sights of the town.

In this town, apart from pottery and ceramic and going in and out of workshops, you can also get lost round the old part of the town and visit the Palace-Castle in the centre.

But the route must continue and if you buy a lot and carry a lot of weight, you won’t be able to climb the last hill! Better leave the purchases for a visit in car 😉

We carry on to Monells, the town that feels like being at the cinema.

We keep cycling along to the famous town of Monells, the place where the Spanish film “8 apellidos catalanes” was filmed. If you’ve seen the film you’ll know what I mean, if you haven’t seen it, watch it before you do the route, you’ll laugh lots and see what all the fuss is about.

It doesn’t matter which entrance you use to get into Monells, the town is very pretty. The arches, the stoned walls, the central square… it’s all beautiful! There is no inch of this town that doesn’t spell history and beauty. We recommend that you have a wander through the streets and visit the town to take some photos for your album.

It’s now time to carry on and keep pedaling, even though all you can think of is getting back home and lying down on the warm sand and sunbathing in Cala Cristus… It’s time to cycle into a new town.

Cruïlles, the medieval town from the 10th Century

We’re in the last village on the route for today, in the heart of the Baix Empordà. A little town from the 10th Century where we can see the castle tower, the Sant Miquel de Cruïlles monastery, the church of Santa Eulalia de Cruïlles and the church of Mare de Déu de l’Esperança.

And do you know what? We’re only 20km from the final and all we’ve got to cross is the Coll de la Ganga and the town of Calonge. Ready to climb?

Is it going to be as easy as its name describes?

Along this route, we travel through the most eastern point of the Gavarras mountains. It’s another pretty hill to cycle up surrounded by nature, where pine trees are the most dominant again. It’s 8.8km long and has a 12% ramp, but with an average of only 2.2%. Easy to climb even though our legs have cycled 70km already.

The view of the sea will accompany us again on the first third of the descent. Then we’ll be riding tree-lined roads until we reach the urbanisation “Rio d’Oro” where the road flattens out until Calonge.

Prehistoric origins between the sea and the mountains

Last stop on the cycling route for today. We’re in Calonge town, which dates back to the prehistoric times, noticed by the Dolmens and Menhirs that lie around the town.

The Castle of Calonge, located in the middle of the town, is one of the biggest forts in the Baix Empordà and dates back to the 12th Century.

Finally, the last 2.5km of cobbled roads. The last straight, last hill and last burst of energy and you’ll have completed just 84km that have taken us on an amazing journey through history in the Costa Brava.

Our house is your house

Now we’re back at the campsite, all you have to do is relax at the beach, or on the terrace at the bar with a nice cold drink and good meal prepared by our chefs.

Remember that it’s important to eat well before, during and after doing exercise. We’re actually preparing another blog post talking about the different options you have so you don’t miss out on any energy and the dishes you can order from our restaurant BlauVerd to complement your diet!

Thank you for cycling with us today, and most of all, if you like what you’ve read, don’t forget to subscribe to our newsletter to be in the know about all of our new updates and new blog posts!

Don’t forget to download our tracks for the route of the Medieval Towns of the Costa Brava on Bike to do it whenever you like.

We’re still on the road round the medieval towns of the Costa Brava on our bike! Stage 2

On route by bike: Medieval towns of the Costa Brava By Bike (Stage1)

Camping Internacional de Calonge: A corner on the Costa Brava to get lost while practising sports

Manage Cookie Consent
We use cookies to offer useful features, measure performance and improve your experience. By clicking on ‘Accept all’ you are accepting the use of all the cookies. If you would rather set your preferences or reject them, click on 'Settings'. You can read more about this in the link:
Manage options Manage services Manage vendors Read more about these purposes
Mostra les preferències
{title} {title} {title}